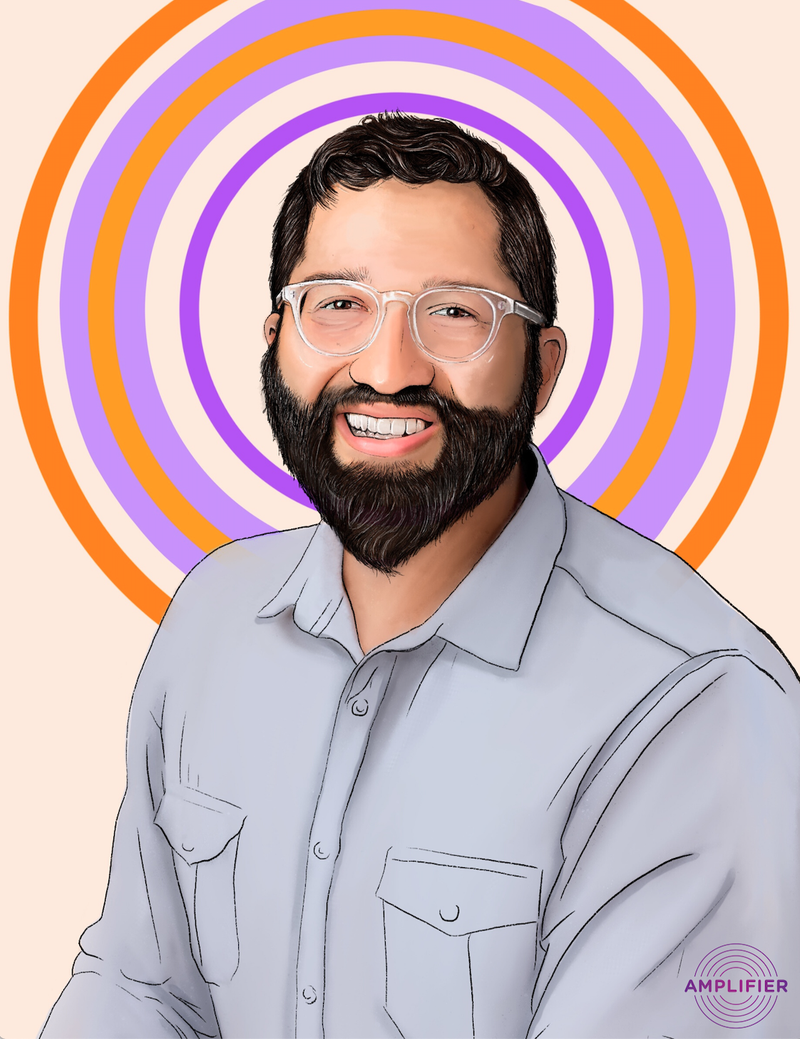 Q: Hi Muhi! Thank you so much for taking the time to chat with me! For those who are not familiar with your work, how would you describe the American Muslim Community Foundation (AMCF)?

A: The American Muslim Community Foundation is a community foundation that’s set up to represent Muslim philanthropy nationally. It is the first organization to focus on donor advised funds, giving circles, and endowments for Muslim families and nonprofits across the country. We’re always looking for more ways to democratize and demystify philanthropy!

Q: How did you come up with the idea for AMCF?

A: I was the first development hire at an organization called the Institute for Social Policy & Understanding. After a few years, I realized the organization was raising hundreds of thousands of dollars, just to have to do it over again the next year. It was eye-opening and frustrating, and it planted the idea for a more sustainable way to do fundraising. So, I went back to the University of Michigan to earn my graduate degree in nonprofit management. Right after that, I moved to California, and worked for Ta’leef Collective and the American Red Cross.

I eventually started looking at how I could use my development skills in my own community. I saw an an opportunity to focus on Muslim philanthropy at a national level, helping families to distribute their charitable giving in a more meaningful way and not ‘recreate the wheel’. When we started, we looked at the national landscape of religious philanthropy. There are Jewish Community Centers, there’s the National Christian Foundation, and a handful of others. When looking at these large-scale, national organizations and how they’re funded, we realized there really wasn’t a corollary in the Muslim community. We’re hoping that, 50 years down the line, we can be as sizable and impactful as the major institutions in other religious communities.

I would also say the current political situation definitely reinforced why I do what I do. We’re working to create a positive voice for Muslims in the United States and showcasing that we contribute, especially philanthropically. We’re able to show that we are part and parcel of this national fabric.

Q: What does Muslim philanthropy mean to you?

A: Growing up, my parents were super involved in the Muslim community. They built a house within a mile of the Mosque. They were always volunteering. They would host potlucks, and my dad was on the board of the mosque. I really got a sense of service through that community. It was a large part of my identity growing up. Plus, my childhood in and around the Mosque instilled the value of charitable giving in me early on.

As in Judaism, in Islam, giving is a key value. The Arabic word “sadaqa,” which means charity or benevolence, is mentioned in the Quran over 100 times, and it’s often paired with the Arabic word for prayer: salah. There’s also zakat, the pillar of Islam which is along the same lines, but, while sadaqa is seen as voluntary giving, the practice ot zakat is religiously mandated almsgiving, at a rate of 2.5% of the cumulative wealth annual of anyone who is financially able. Zakat is meant to purify our wealth.

Once I was entrenched in the nonprofit world, I realized that we hadn’t evolved the way we’d fundraised in the Muslim community in a very long time, even though charitable giving is so central to the teachings. A lot of the fundraising in the Muslim community is done through events. And now, due to the COVID-19 crisis, organizations have had to cancel galas and parties, their primary modes of fundraising. Through donor advised funds (DAFS) and communal funds, which can be distributed remotely, the American Muslim Community Foundation has solidified its tools as ways to make American Muslim philanthropy more resilient. We’ve also started a COVID-19 Response Fund for Nonprofits to help organizations as they’ve had to face a lot of cancellations.

Q: Can you name some more projects and organizations where AMCF grants have gone?

A: Sure! One project is with Stanford University. It has a Muslims and Mental Health Lab, where they research the theological and scientific role that psychology plays. At the University of Michigan, our grants help to provide indigent care to those who can’t afford it at their hospital. And, after Hurricane Harvey hit Houston in 2017, we were the first to give to the Houston Food Bank, and we’ve continued to provide an annual gift to show the community that we care. AMCF grants aren’t just funding Muslim initiatives; they go to whatever the Muslim families want to support!

Q: What do you hope to see within the greater philanthropic community at large? How can philanthropy do better?

A: Melinda Gates wasn’t the first person to say this, but, in an interview she had with David Letterman, she talked about the role that philanthropy fills. She said it’s to provide what governments and the private sector can’t provide. We’re really hoping that, in all causes, whether it’s social justice, education, women’s empowerment, children, arts, or any other sector that’s meaningful and needs support, that we as a Muslim community can step in to make a difference.

Feeling inspired by Muhi to create or join a collaborative giving project? Reach out to Amplifier for coaching, trainings, and resources.