From the Quickstart to the Circle: How two friends built community and impact in Washington, DC

With training from the Giving Circle Quickstart, Becca Flyer and Lauren Gross teamed up, gathered their friends, and donated $1,757.

About a year ago, I first heard the term giving circle. I loved the concept: a group of intentional, caring people coming together to pool their resources to give with greater impact. Once I became the program manager for Growfund for Giving Circles, a no-minimum donor-advised fund (DAF) that supports collective grantmaking, I was excited about the opportunity to take my passions for philanthropy and community-building, and apply them to my career. The challenge was - I had never created a giving circle of my own. I was surrounded by inspiring people who bring together dozens, if not hundreds, of people to have an impact on a variety of causes, yet I still wasn’t sure where to start, myself.

Then, one afternoon, Becca Flyer, my friend and fellow JDC Entwine DC Community Representative, approached me and suggested we start our own giving circle. She had participated in Amplifier’s Giving Circle Quickstart, so she would get three coaching sessions with the Amplifier team that we could use towards starting our circle. I was sold.

We decided to focus on young Jewish women in the DC-area, since we knew other women who were looking to connect in a meaningful way. Over the next few weeks, Becca and I recruited members from our respective Jewish worlds - JDC Entwine, Amplifier, KAHAL, Schusterman, BBYO, and Jewish Women International. We had hoped that 6 or 7 people would join, so were ecstatic when we learned that 14 amazing women were willing to commit 2 hours per week for a period of three weeks (which is generally unheard of in DC!). Many of these incredible women have full-time jobs, extracurriculars, and are raising families, so taking time for themselves—to evaluate their values, core beliefs, and the causes they care about most—was a much-needed luxury that the group indulged in.

Here’s what we did at each of our 3 weekly meetings: 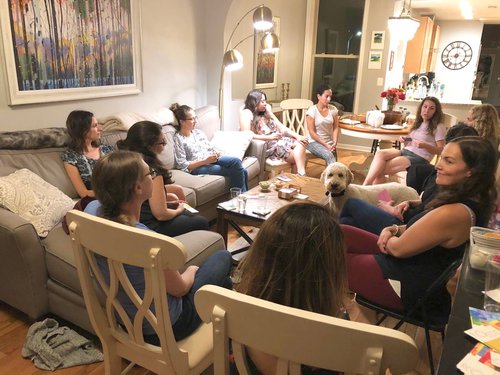 In the end, we allocated $1,757 grant dollars to two organizations:

We ended the night feeling satisfied with our decision and energized by the opportunity to support such important causes.

For both Becca and myself—and we believe for many other women in the group—this experience will have a lasting effect. Not only has it allowed us the chance to raise funds for important causes, it has also helped us build a new community of bright, generous, and kind women from whom we can learn from and grow.

Feeling inspired by Becca and Lauren? Sign up for the Giving Circle Quickstart, kicking off on 2/26!

Outside the Tzedakah Box: an interview with Amplifier CEO Liz Fisher

The Jewish Teen Funders Network interviewed Liz in quarantine to explore giving during COVID-19 and beyond.